I have had a stocks and shares ISA with invest engine since the start of August, and I’ve invested mostly into Vanguard FTSE All‑World (VWRP) and Vanguard FTSE Emerging Markets (VFEG) and a couple of other ETFs, all of them being accumulating ETFs where the dividends are reinvested. Its been over 3 months and the amount of shares in all the ETFs hasn’t changed. Does dividend reinvestment only happen if you hold a certain number of shares? I’m quite concerned that I haven’t received any dividends as reinvestments after 3 months.
Is dividend reinvestment different for each ETF, if so is there a way to find out when the dividends are sent? I would have assumed a Vanguard ETF at least would have had a more frequent dividend payment.

The number of ETF units shouldn’t change in this case. Instead, the value of each unit should increase, and you won’t notice it as the ETF price is also affected by the markets. Some ETFs may reinvest dividends immediately after they are received from each constituent, while others may accumulate dividends and reinvest them periodically. This is up to the ETF manager to decide, and it can vary from one ETF to another. In general, ETF managers try to maximize returns for their investors, so they may choose to reinvest dividends in a way that they believe will provide the best returns.

If you want to see dividend payouts, you may want to go for a distributing class instead of accumulating and use the InvestEngine AutoInvest feature. In this case, dividends will be paid (usually quarterly) and then reinvested into your portfolio.

I thought reinvesting ETFs buy more shares of the ETF? I never heard of the value of the unit ever increasing. Distributing ETFs give you dividends as cash which can be reinvested manually or withdrawn, while accumulating ETFs automatically reinvest dividends back into the ETFs, or am I mistaken? The actual value of each share is dependent on market factors and not how much I have been paid dividends?

The dividends from accumulation funds are used to buy more shares in the fund’s underlying assets rather than increasing the number of units you hold.

This explains it well:

How do accumulation funds work? - Monevator

How do accumulation funds work? How do the dividends show up in the value of your fund? Are their ways to game the acc fund system?

I read through the article, is there any way to find out when dividends are reinvested? Does the actual return of investment become visible to me when I look at my account? I followed the steps to see when Vanguard paid dividends on its ETFs but they were all for distributing ETFs only.

is there any way to find out when dividends are reinvested?

That information can be hard to come by, because the timing of trades is part of the secret sauce with which ETF providers compete with each other on lowering costs and tracking error.

Most ETF providers will tell you that income received by accumulating class shares “will be reinvested into the fund”. However, Vanguard’s way of expressing the same idea is a bit more nuanced. This is from Vanguard’s prospectus:

A Fund’s income, attributable to any class of Accumulating Shares, is reflected in the Net Asset Value per Share of the relevant class.

This tells you that reinvestment means, as the first step, dividends received into an accumulating class share are merged into its NAV. When exactly this cash portion of the NAV is used to buy more constituent stocks of the ETF (or whatever black magic they use to replicate the benchmark index), is up to the fund manager and the fund’s trading rules, part of which is secret sauce.

But in any case, the NAV is now higher, which should be reflected in the ETF’s share price, market conditions permitting.

Most funds have two versions. One is “accumulating” and the other version is “distributing” which refers to what happens to dividends. Investopedia is an allright-ish starting point to familiarise yourself with what different buzzwords like accumulate, distribute and many other terminologies means.

Using your VWRP fund as an example. Look at the difference in unit/share price between VWRP (accumulating) and VWRL (distributing). Your VWRP cost a lot more compared to VWRL. That’s where your “dividend” went, you on the other hand get buggerall, your fund gets more valuable though…

All the OP needs to do is to sell both VWRP and VFEG and repurchase VWRL and VFEM then he will receive the dividends to either cash out to pay his gas and electric bill, or buy more of the funds he received the dividend from, or to use that dividend to invest in any other ETF.

Unless it’s in an ISA, then you don’t want to follow the cashing out option. What goes in the ISA stays in the ISA - for ever…

Another thing to look out for is distribution frequency. You get monthly dividends, usually from bonds or REIT’s. The there’s quarterly distributions; 4 times a year, every 3 months. Some funds only pays dividends biannually as in twice a year, once every 6 months. So, if it’s dividends you’re after then decide how often you want to receive them. Its not like one pays more than the other, it’s more about the fund yield. Think of it this way. You have a £12K annual salary; You can receive it once a year as a lump sum £12k or bi-annually two payments of £6K six months apart or quarterly payments of £3K three months apart or monthly a thousand quid 12 times a year.

Perhaps a ‘group reply’ from HQ would be appreciated. There seem to be a number of questions that need succinct answers providing.

Unless, of course, you are investing for income. I’m between early retirement and state pension so choose to take my dividends as income - tax free.

Yup, I am following a similar strategy. I am also in that age grouping and therefore growth stocks have no practical value to me. I don’t care about what the value of my stock will be in 30 years time; I’ll be dead by then so technically it is worthless to me. On the other hand, stock that pays me dividends means I can actually make use of it however I want. And yes, I don’t want to pay tax on that

For @jk233’s interest, I made a plot of the difference in growth between VWRP vs. VWRL:

The result is a semi-regular jolt upwards 4 times a year. 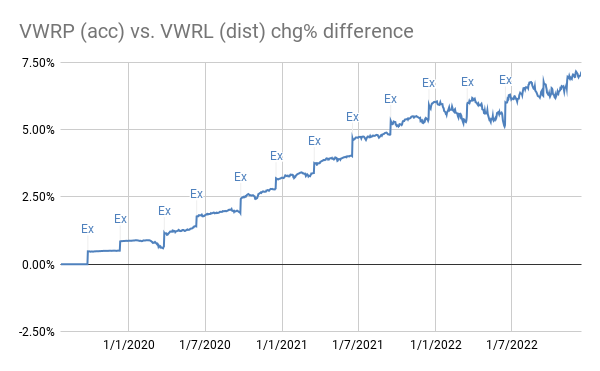 So we now know, for VWRP at least, dividends are merged into the NAV on the ex-dividend dates of VWRL. That’s about 2 weeks earlier than the actual dates VWRL pays out its dividends.

(edit)
Just for the heck of it, I wanted to find an ETF from a different provider that distributes on a semi-annual schedule. Found the pair – DEMS (acc) vs DEM (dist) – and plotted their difference in change. It shows the same thing: 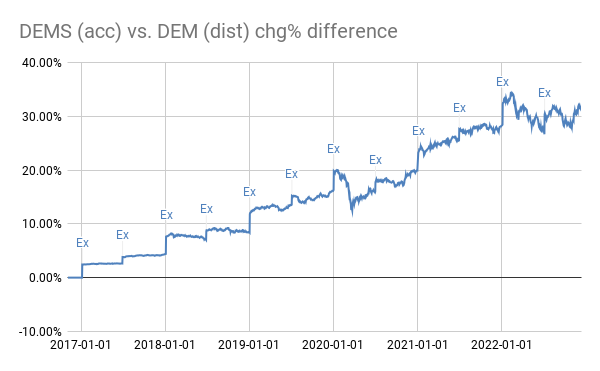 @chungf Awesome explanation you did there! A picture is worth a thousand words as they say! A lot of time and effort you put into this. Much appreciated!

I don’t think that’s quite right.

Now for the distributing share class of the ETF - the NAV will drop when it goes ex-div, as that money will be paid to share holders. Whereas in the acc share class you won’t see a jump or a fall as there is no distribution

Quite correct. What’s really happening is the other way round – the NAV of the distributing class drops on the ex-dividend date. The plots are easy enough to fix though; just flip the Y-axis upside down 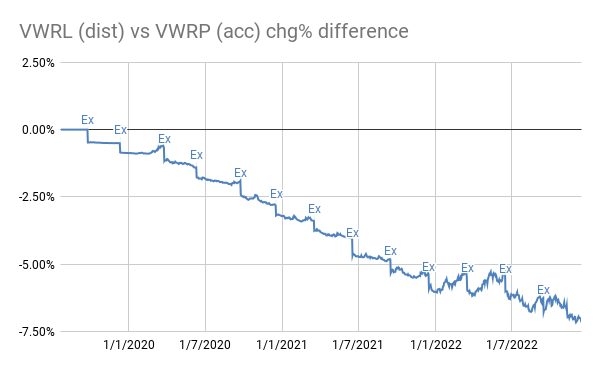 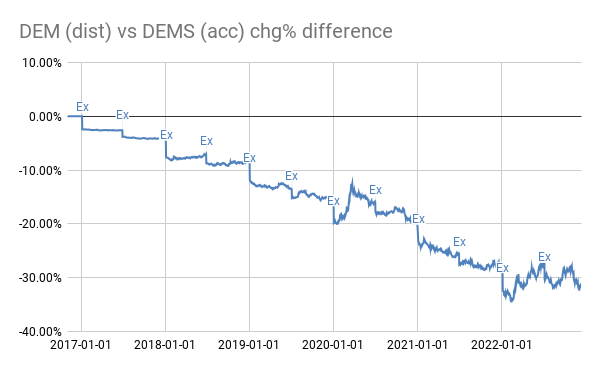 Also check out the spread in VWRP and VWRL. VWRP was roughly 20bp more expensive last I checked.

Thank you for the original question and explanation! I was too wondering why I did not see an increase in number of shares. How does it work with taxes? Normally tax is withheld on dividend? For cash paying ETF I assume the tax is deducted. What about the Acc type ETF s?